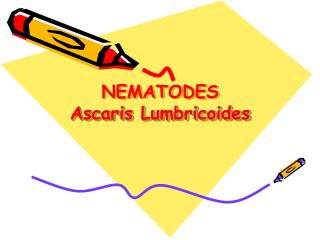 Classes of Nematodes - . nematodes. the four main nematodes that we will concentrate on are: ascaris pinworm hookworm

NEMATODES - . roundworms. what is a nematode?. a nematode is a roundworm. there are more nematodes are earth than any

EPIDEMIOLOGY AND CONTROL OF HELMINTHIC INFESTATION - . dr. igbinedion mbbs, mph,frsph. ascariasis. it is caused by

Ascariasis (Roundworm) - . end7 at ut. what is ascariasis ?. ascariasis , also known as roundworm, is an intestinal