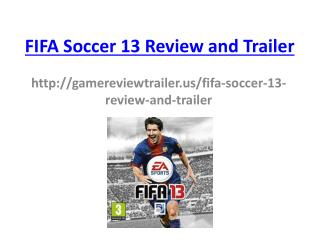 FIFA 13 is the professional soccer game franchise which is released in 2012. In this game, you will play the game based on the current real-life players, teams and leagues associated with the FIFA organization (Federal International de Football). The purpose of the game is to present the most realistic international soccer experience available in a video game to-date. Features include, game play mechanics improvements on both offense and defense, an extensive roster of players, teams and leagues, multiplayer play options both locally and online, and social network functionality through the EA Sports Football Club. FIFA Soccer 13 Review and Trailer - Fifa 13 is the professional soccer game franchise which is released in 2012. in this

Soccer and the FIFA World Cup - . by: señora kerr, 2007. history of soccer. soccer is a sport that many cultures have