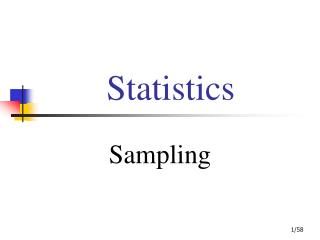 Statistics 300: Elementary Statistics - . section 11-2. chapter 11 concerns the analysis of statistics that are

Statistics - Is . . . . . making a silk purse out of a pig's ear, i.e. getting reliable results from data which is

Statistics - . assignment 1 example problems. types of data. question: determine whether the given value is a statistic

Statistics - . chapter 8: inferences based on a single sample: tests of hypotheses. where we’ve been. calculated point

Statistics - . stem and leaf diagrams. a 10 question warm up…. find the median of the following numbers:-. 1)

Statistics - . how to get data and model to fit together?. the field of statistics. not dry numbers, but the essence in

Statistics - . an intro to our world of data by s. middleton, m.a. there are lots of reasons one takes a course in school

Statistics - . entering numeric data. on your iclicker . you will be told when a numeric input is required press blue

Statistics - . “there are three kinds of lies: lies, damned lies and statistics”. # 4 out of 5 dentists recommend