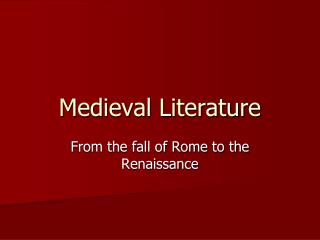 Medieval Literature . From the fall of Rome to the Renaissance . English & French Literature. Dominated by: The epic Beowulf The romance Song of Roland (early) Sir Gawain and the Green Knight (late) The allegory The Canterbury Tales The Divine Comedy The folk tale The lyric