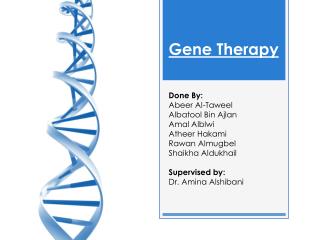 Gene Therapy - Is a emerging technology helping to manipulate the defective genes, basic understanding of the principles

Adenosine-Deaminase (ADA) Deficiency - . ada is responsible gene in ~20% scid. often fatal, if untreated, due to