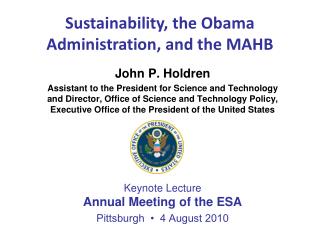 Science and technology - . questions (science). what happened during the scientific revolution in 20th century? how is

Environmental Science: Toward a Sustainable Future Richard T. Wright - . chapter 2. ecosystems: what they are ppt by

Technology Options for Sustainable Food Processing - . stoa workshop “how to feed the world in 2050?”. ben langelaan,

John Adams: President #2 - . refresher: what were the positives and negatives of adam’s presidency?. washington’s

Masdar Institute of Science and Technology - . abu dhabi vision. sustainable economic growth, and the development of