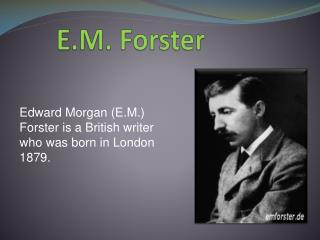 E.M. Forster. Edward Morgan (E.M.) Forster is a British writer who was born in London 1879. E.M. Forster is regarded as one of the leading English writers of the twentieth century. He was an English novelist, short story writer, essayist, and literary criticism. Quiz on “A Passage to India” by E. Forster - . the significance of the titles of each section: mosque, caves and

Edward Morgan Forster - . by: christian truong. boom!. thesis. based on his individual experiences and reactions to

Art, Life and Nature - . a room with a view. what’s the connection between art, life and nature?. art never expresses