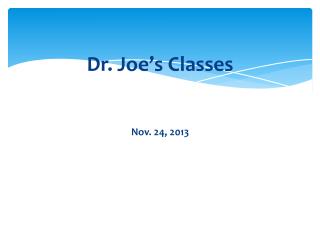 Dr . Joe’s Classes Nov. 24, 2013. Based on the concerns of some students that they don’t know how to start and how to write on, we start today’s class with the following heads-up. . Heads-Up.

C++ Classes How to Create and Use Them - . overview. terminology file topology designing classes functions in classes

Welcome to Psychology Unit 3 - . fyi…. this year we have 2 unit 3 &amp; 4 psychology classes. miss maddock and

Chapter 9 – Designing Classes - . chapter goals. learn to identify side effects know when to use method preconditions

Chapter 3: Implementing Classes - . part 1. chapter goals. to become familiar with the process of implementing classes to

2013 Record Book and Awards - . guidelines and tips for leaders. why do a “county level record” book?. it is a more

Background - Attending to income and employment equity in the development of stronger cbr teams: examples from the proud