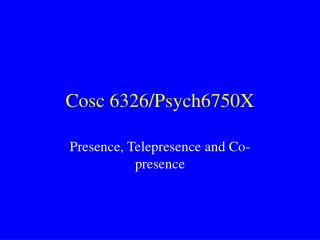 Cosc 6326/Psych6750X. Presence, Telepresence and Co-presence. Presence. the subjective experience of being physically present in the VE rather than the real environment ‘Being there’ Considered important in telecommunications, film, VEs

Cosc 5/4730 - . android: menus and actionbar. android menus, a note. menus are both very simple and easy to implement and

Staying Present in the Presence Part 4 - . luke 5:1-2. 1 one day as jesus was standing by the lake of gennesaret , with

OUR MISSION - . we partner with our customers to innovate and discover new possibilities. solberg manufacturing, inc.

You Don’t Have to be Barnes &amp; Noble to Have Cool Book Displays! - . misha stone -- fiction dept., seattle

Cosc 4750 - . chapter 28: daemons. daemons. used by mick bailey, a british gentleman, during the 60s daemon an older from