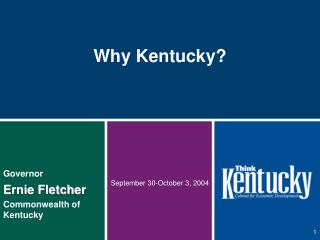 Invest in Kentucky - . december 2008. welcome to kentucky. hofbrauhaus newport. where is kentucky?. kentucky is located

THE KENTUCKY SPELEOLOGICAL SURVEY - . &quot;to preserve cave and karst data for the commonwealth of

Kentucky and Transportation - . kentucky's infrastructure supports businesses by supporting transportation: within the

Kentucky by Michelle - . kentucky symbols . the flower of k entucky is a goldenrod. the bird of kentucky is a cardinal.

Kentucky Stereotypes - . by: bethanie durham. on tv and other types of media people mainly see eastern kentucky and then

Reconstruction in Kentucky - . kentucky studies. kentucky at the end of the war. kentucky emerged from the civil war in

THE KENTUCKY SPELEOLOGICAL SURVEY - . &quot;to preserve cave and karst data for the commonwealth of