A BRIEF INTO THE CHINESE LEGISLATIONS - PowerPoint PPT Presentation 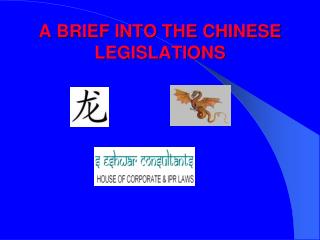 A BRIEF INTO THE CHINESE LEGISLATIONS A BRIEF INTO THE CHINESE LEGISLATIONS

A Brief Chinese History From the Tang Dynasty to the Qing Dynasty - . the tang dynasty (618-907 a.d.). the second golden

Chinese Civilization is brief, illustrations only - . chinese civilization. routes of the hwang he. 1887: 2,000,000 dead

A Brief Journey into Parallel Transmit - . jason su. description. goal: expose myself to some of the basic techniques of

A Brief Chinese History From the Qin Dynasty to the Sui Dynasty - . the qin dynasty. time: 221bc-206 bc the first unified

A Course of Translation from Chinese into English - . chapter 3 translation of sentences. 3.2 主语的确定.

A brief history of Chinese “coins” - . noah gentry-george. historical overview . coinage and currency, like many

Brief History of the Chinese in Australia - . coming to

Challenging behaviour legislations - . recognize the key legislation and guidance that underpins our responses to

A Brief Introduction to Chinese Culture in America - . brief history of the chinese in america. the chinese were the

Translating the English legal lexicon into Chinese - . by dr alan tse. major issues to consider:. [a] consistency and