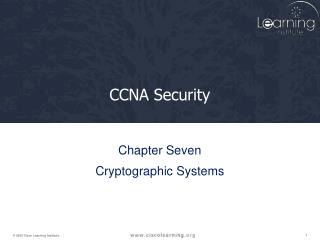 CCNA Security. Chapter Seven Cryptographic Systems. This lesson should take 3-4 hours to present The lesson should include lecture, demonstrations, discussions and assessments The lesson can be taught in person or using remote instruction. Lesson Planning. why get ccna certification? - Ccna training has changed many people’s life. the network industry is growing day by day