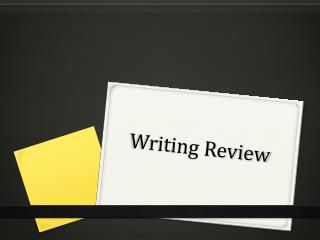 The Georgia Writing Assessments - . why are the writing assessments in georgia changing?. when the quality core

Goals for this quarter: - . find your writing voice how? practice! review grammar after the review, you are responsible

Working with NSF: Writing, Reviewing and Rotating Tanja Pietraß - . the writing process. how to write a strong nsf