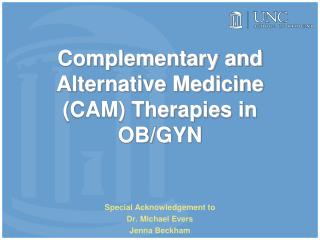 Complementary &amp; Alternative Medicine - . types of cam. objectives. the learner will be able to: discuss three

The need for complementary approaches - . fred steward. a broad &amp; inclusive concept of transition. a systemic

Conventional and Complementary medicine - . chapter 15. self-care. self-assessment symptoms are often an expression of

Complementary &amp; Alternative Medicine - . principles and explanations. objective. the learner will be able to

Therapies - . understand the different psychological perspectives and how they are applied in the therapeutic setting be

Therapies - . types of therapy. psychotherapy—use of psychological techniques to treat emotional, behavioral, and