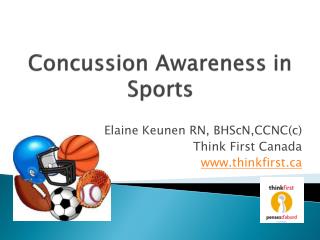 Concussion Awareness in Sports. Elaine Keunen RN, BHScN,CCNC(c) Think First Canada www.thinkfirst.ca. Interesting facts about the brain. The brain weighs about 3 lbs. The brain uses 30% of the oxygen and energy in your body.

1. Do you have any traditional sports which are not Olympic disciplines? Introduce them! - Sports. 1. do you have any

Health and Safety - . test review. a. fontanel b. hematoma. c. bruise d. concussion. another name for the soft spot on a

Timeline of Environmental awareness - . an introduction to wikipedia articles related to ess. events. click on the box

PHonological Awareness Therapy Techniques That Work! - . we examined the use of explicit teaching of phonological

Youth Sports - Do you know what the #1 reason children cite for their participation in a sports program? “to have