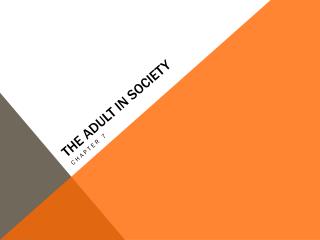 The adult in society The adult in society. Chapter 7. Shakespeare. All the world’s a stage And all the men and women merely players: They have their exits and their entrances; And one man in his time plays many parts. ---- As You Like It, Act 2, Scene 7. As you like it.

The adult in society

The Sociology of Education - . 14.1. introduction. society’s future largely depends on the successful socialization of

Adulthood - . do now: write a response to the following statement “i’ll know i’m really an adult when …..”.

Colonial Society on Eve of Revolution: Chapter 5 - . the colonies, circa 1750. life in the south. short life expectancy

BECOMING AN ADULT - . unit 2 – chapter 4. the transition to adulthood. becoming an adult is a process this process