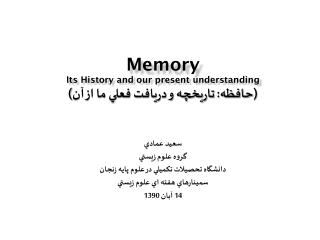 Virtual Memory - . chapter 8. process execution. the os brings into main memory only a few pieces of the program

IB History - . the new stuff. aims. promote an understanding of history as a discipline, including the nature and

Memory - . ba 362 - fall 2000. what do we know about the general properties of memory?. memory structure short-term

HISTORY DAY 2005 - . communication in history: the key to understanding. what is history day?. semester-long experience

Improving You Memory - . by: adam bass. introduction. has anyone ever had trouble remembering someone’s name or forgot

The Service Club between history and present time - . “ the rotary club should not be ashamed of its early history; it