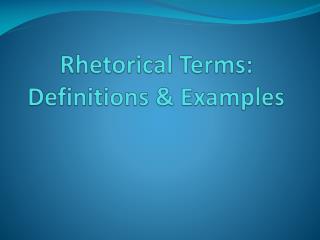 Rhetorical Terms: Definitions & Examples. Let us go forth to lead the land we love. repetition of initial consonant sound with several words. alliteration. Financial Structuring - . project finance terms in private analysis. the table below illustrates the type of terms that

Advice Students should be able to recall these definitions - Key knowledge: 1.1 definitions of physical, social and

Rhetorical Strategies: Ethos, Logos, and Pathos - . “rhetoric is the art of ruling the minds of men” -- plato . what

Rhetorical Terms - . all lists. alliteration. the repetition of sounds, especially initial consonants in tow or more