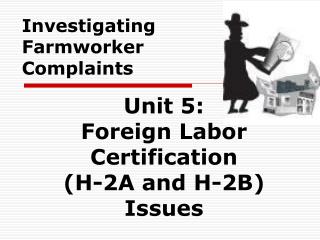 Complaints - . presentation to scrutiny panel on how environmental services has reduced complaints since 2009 .

Complaints - Any employee, or group of employees, or the bargaining agent (if any) may file a complaint with the

Complaints - Customer service is very important. a satisfied customer will return and recommend your company to his

PART 2 Farmworker Eligibility Verification - . this section will provide you with the information needed to verify a

Delete Complaints Board Complaints - The complaint board can delete reviews from other websites easily. but for removing

Investigating - . newton's law. of cooling. by lauren harris &amp; harini ramireddy. the purpose. of our