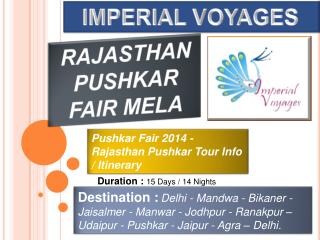 The Rajasthan Pushkar Fair, or Rajasthan Pushkar ka Mela, is the annual 5 days camel and livestock fair, held in the town of Pushkar in the state of Rajasthan, India. Pushkar fair is one of the world's famous camel fairs, and apart from buying and selling of livestock it has become an important tourist destination and its highlights have become competitions such as the "matka phod", "longest moustache", and "bridal competition" are the main draws for this fair which attracts thousands of tourists. In recent years the fair has also included an exhibition cricket match between the local Pushkar club and a team of random foreign tourists. The Imperial Gazetteer of India mentions an attendance of 100,000 pilgrims in early 1900s. The festival Thousands of people go to the banks of the Pushkar Lake where the fair takes place. Men buy and sell their livestock, which includes camels, cows, sheep and goats. The women go to the stalls, full of bracelets, clothes, textiles and fabrics. A camel race starts off the festival, with music, songs and exhibitions to follow. Between these events, the most waited for is the test of how the camel is able to bring the items. In order to demonstrate, the men go up on the group of camels one after another. Time It is celebrated for 5 days from the Kartik ekadashi to Kartik Poornima, the full moon day (the 15th) of Kartik (October–November) in Hindu calendar. The full moon day is the main day and the day, according to legend, when the Hindu god Brahma sprung up the Pushkar Lake, thus numerous people swim in its sacred waters. For year 2014 it is celebrated October 31-November 6. Pushkar Fair in Rajasthan - Want to pushkar fair and varanasi tour. you consult with india authentic tours. we give

Pushkar Fair - Interested in pushkar and pushkar fair? contact us at allurinmg india tour today and our travel

Golden Triangle Tour with Pushkar Fair - Get the best deals for pushkar fair with golden triangle tour. our specially

UP Rojgar Mela - Bumper job openings!! about 5500 district wise jobs are disclosed by up government, considering the same