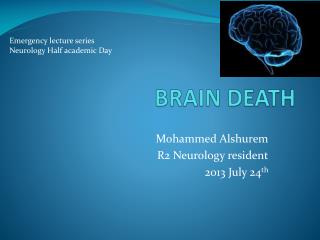 Localization of Brain Stem Lesions - . anatomy of the brain stem. part of the brain that extends from: the rostral plane

Chapter 14 The Brain and Cranial Nerves - . largest organ in the body at almost 3 lb. brain functions in sensations,

Gross anatomy and development of the brain stem and cerebellum. Fourth ventricle - . dr gallatzkatalin. the brain.

Unit 12 Caring For Resident When Death Is Imminent and Following Death - . nurse aide i course. caring for resident when