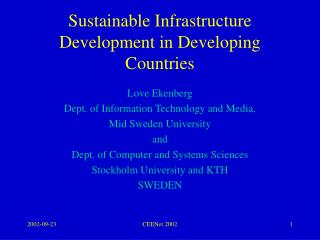 Education and Action for a Sustainable Future - . debra rowe, ph.d president u.s. partnership for education for

Evaluation and Evidence: Applying guidelines for health IT evaluation in developed and developing countries - . nicolette

Developing and testing performance indicators for the development and transfer of EST’s under the UNFCCC: about - S and

CP551 Sustainable Development - . “the need of a constantly expanding market for its products chases the bourgeoisie