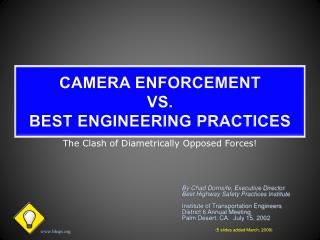 Enforcement Best Practices in Cortes - . history. before, out 63 cases, 60 were all dismissed only 3 prospered in the

IP Camera Vs Analog Camera - Ip cameras are highly secured and need authentication for access. these cameras also have a

Camera Messenger Bags VS. Camera Backpacks - Bags come in all shapes and sizes, so how do you know which bag is right