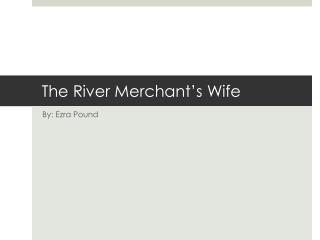 Southern and Eastern Asia - . the yellow river or huang he is the second-longest river in china (after the yangtze river)

Personal Business Loans from Merchant Advisors - In the current period of recession, a good personal credit is important

SHAKESPEARE’S MERCHANT OF VENICE - . context. consider…. • when, if ever, is the desire for revenge justified ?

Home Based Business Loans from Merchant Advisors - Getting quick funding for a startup is never easy, and for a

What is a River System ? - . a river and all of its tributaries tributary: streams and smaller rivers that feed into a

The Man Who Mistook His Wife For A Hat - . oliver sacks. cezar octavian morosanu. by.

Accounts Receivable Financing from Merchant Advisors - How can you unlock your cash flow? accounts receivable factoring -