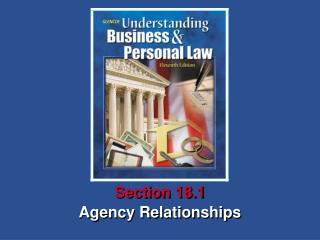 Section 18.1. Chapter. Creation of an Agency. 18. Section 18.1 Agency Relationships Section 18.2 Creation and Types of Agents . What You’ll Learn. How to explain the nature of an agency relationship (p. 392) How to distinguish between a servant and an independent contractor (p. 394).