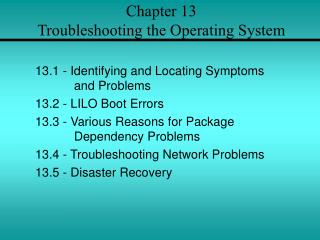 Chapter 13: The Urinary System - . chapter objectives. urinary tract and the flow of urine through the body. kidney and

The Vascular System – Chapter 13 - . the vascular system consists of arteries, veins, and capillaries through which the

The Operating System - . what is an operating system?. the software which makes it possible for you to use your computer