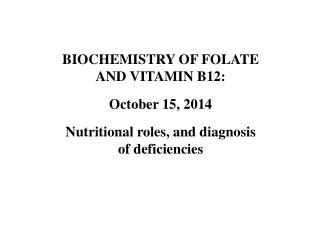 BIOCHEMISTRY OF FOLATE AND VITAMIN B12: October 15, 2014 Nutritional roles, and diagnosis BIOCHEMISTRY OF FOLATE AND VITAMIN B12: October 15, 2014 Nutritional roles, and diagnosis of deficiencies. METHYLENE-THF : DONATES [CH 2 ] FOR DNA SYNTHESIS. DEOXYTHYMIDINE (dTMP): REQUIRED FOR DNA SYNTHESIS, AND FOR CELL DIVISON.

BIOCHEMISTRY OF FOLATE AND VITAMIN B12: October 15, 2014 Nutritional roles, and diagnosis

Nutritional Considerations - . introduction… . research shows that, regardless of the sport, an athlete’s diet plays

PREGNANCY DIAGNOSIS IN COW - . there are various methods for pregnancy diagnosis like:. managemental method ultrasond

Diabetes Ebook: Diabetes And You A Comprehensive, Holistic Approach - The months of january and september in orlando,