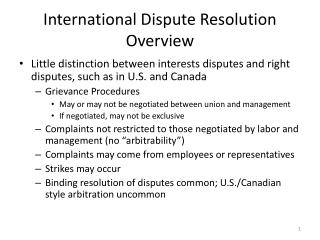 International Dispute Resolution Overview. Little distinction between interests disputes and right disputes, such as in U.S. and Canada Grievance Procedures May or may not be negotiated between union and management If negotiated, may not be exclusive

ADR Alternative Dispute Resolution - . a toolkit for the hr professional compiled by the employee and labor relations