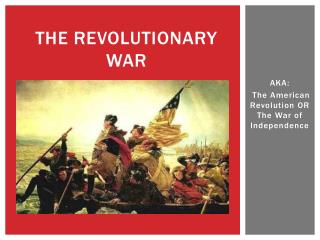 The Revolutionary War. AKA: The American Revolution OR The War of Independence. Events Leading Up to the War. Stamp Act. Townshend Acts. Proclamation of 1763. Important People. King George III- (1738-1820).

This is... - Revolutionary war. this is. now entering the studio are our contestants!!!. here is your host… mr. moffat.

Bellringer - . please write the question and your answers: do you believe the united states constitution was placed in

Chapter 21 Revolutionary Changes in the Atlantic World - . 1750–1850 . prelude to revolution: the eighteenth-century

CT made easy - . ☺. introduction. the computed tomograpic (ct) scanner is revolutionary. it does not use an ordinary