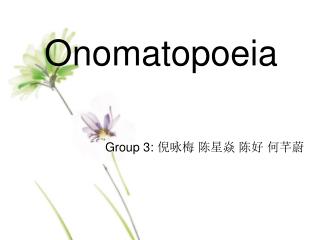 Introduction to Poetry - . s1. learning intentions. to understand onomatopoeia (the use of sound words) and how to use

onomatopoeia - . definition. onomatopoeia means a sudden noise effect. crash! the cars ran into each other. . hooray we

Figurative Language and Poetry Terms - . oxymoron and onomatopoeia. oxymoron. an oxymoron is a figure of speech that puts

Onomatopoeia Project - . slide 1 – brainstorm as many sound words as you can think of (there should be lots!) slide 2

Onomatopoeia - . christina zendzian march 10, 2014 a4. what is onomatopoeia??. words associated with it’s referent