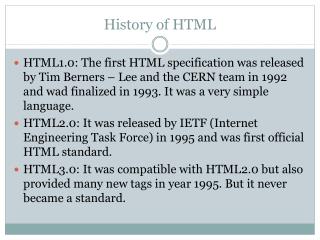 History of HTML. HTML1.0: The first HTML specification was released by Tim Berners – Lee and the CERN team in 1992 and wad finalized in 1993. It was a very simple language. HTML2.0: It was released by IETF (Internet Engineering Task Force) in 1995 and was first official HTML standard.

Web Technologies - . anupriya sharma. table of content. html xhtml xml. html. what is html history what is it used for

Including Comments in an HTML Document - . on a new blank line in an html document, type the start code for a comment:

The Web Wizard’s Guide To DHTML and CSS - . chapter 1 a review of css1. chapter objectives. to learn the history of

HTML Introduction - . creating a web page. html: the language of the web. web pages are text files, written in a language

Introduction to web development and HTML - . mgmt 230 lab. after this lab you will be able to. understand the viu network

The WWW and HTML - . cmpt 281. outline. hypertext the internet the world-wide-web how the www works web pages markup

The HTML markup language - . are we there yet?. reading. be sure to complete the reading assignments before lab tomorrow