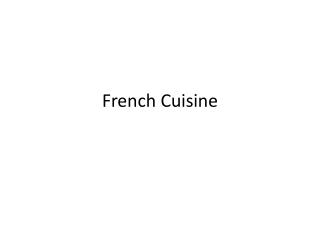 French Cuisine - . a french meal . a meal often consists of the following courses: l’ aperitif -s erved before you are

French Cuisine - . one of modern france's greatest treasures is its rich cuisine. the french have an ongoing love

French Cuisine - . world foods. in france, good food and wine are an important part of daily life. in many parts of

Facts About French Cuisine You Must Know - Le Chat Noir - If it’s your first time exploring french cuisine, ensure an

renovation cuisine - We are experts in renovation and refacing in quebec city and lÃ©vis , as we have optimized