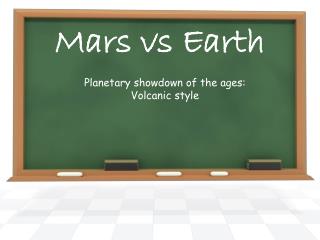 Earth and Mars - . by: maddie jarman cameron huggins was here. solar system. there are 8 planets in the solar system.

From Earth to Mars… - . ah, the beauty of mother earth. only a privileged few have been lucky to view her—in all her

How mars compares with earth - . elly mcaleavey. volume and gravity. mars is just over half of the size of the earth and

Reproducing Earth Systems on Mars - . going to mars. the mars one mission. essential questions. what is required for

The Inner Planets (Earth and Mars) - . by: miguel, vonne, and andren. inner planets. for our presentation we’ll be