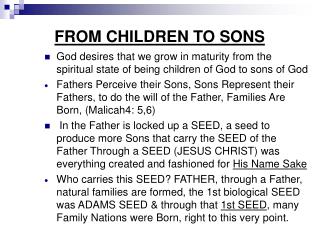 FROM CHILDREN TO SONS. God desires that we grow in maturity from the spiritual state of being children of God to sons of God Fathers Perceive their Sons, Sons Represent their Fathers, to do the will of the Father, Families Are Born, (Malicah4: 5,6) SONS BUILD - Building leadership through sonship unless the lord builds the house, they labor in vain who build it;

Spirit of Sonship Moving from being Orphans to being Sons - . based on the teaching of james jordan. we are meant to be

Vijay & Sons - Vijay and sons have the best quality jewellery at the best price. like rani haar, bangles designs,

BUILDING CONNECTIONS Sons and daughters and fostered children working together - . who we are. core team of 4

Blessings From A Father To His Children - . ephesians 1:3-6. in christ: sufficiency. 3 blessed be the god &amp;

Why Buy Milk Crates From Alex Baird & Sons? - There are so many reasons why numerous customers choose alex baird

PROTECT CHILDREN FROM VIOLENCE - . following on from the oslo consultation. dr. mike wessells professor at columbia

SONS - DYING TO SELF THE FLESH - . phil 2:8,9 being found in appearance as a man, he humbled himself by becoming obedient