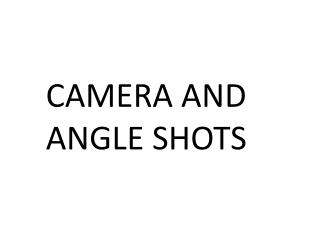 Using the Camera - . the camera features dictate how it is used different cameras have different features exposure white

Camera Shots and Angles - . 180 o rule . when two people are in a conversation, you must draw a line between the two

Film Study Terms - . english language arts. frame. dividing line between the edges of the screen image and the enclosing

Lets review the types of Camera Shots - . who can remember some of the camera shots?. establishing shot long shot medium

Can you work out the following Camera Shots? - . looking up shot? . looking down shot? . long shot? . wide shot? . close

What you need to know about camera shots and techniques - . panning

Chapter - . calling the shots. objective. given: textbook what: group activity on subject distance in preparation for

Standard Shots - . how shots are classified. standard shots. shots are one of the most basic elements in a visual medium.

CAMERA USE - . * directors use the camera in various ways to cause different reactions in the audience * they do this