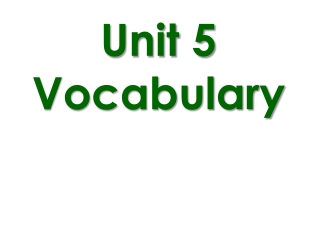 Unit 5 Vocabulary. Point. An exact position or location in a given plane. A point has no dimension; it is represented by a dot. Point A or Point B. Line. Unit 6 Vocabulary - . 2. gregor mendel- monk and scientist who discovered the basic principles of genetics through pea

Vocabulary Workshop Unit 1A - . take 3-column notes on the following vocabulary words for unit 1a which consist of the

Vocabulary Unit 8 - . 1. investigation trying to find out all facts about somebody or something 2. mysterious strange;

Vocabulary Book II – Unit 4 - . vocabulary objectives. you will be able to: match word to definition use the word in a

Unit 3 Vocabulary - . the _________ wall hanging sat in the catacombs for several centuries collecting dust. it is my

Vocabulary Unit 14 - . vocabulary terms for class novel. #1 consequence. the effect, result, or outcome of something