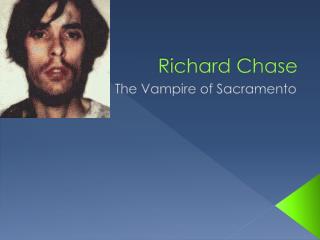 Richard Chase. The Vampire of Sacramento. Background. Richard Chase, born Anthony Richard Trenton, was born on May 23, 1950 in Santa Clara County, California. Killed six people in Sacramento, California. In his adolescence he was considered to be an alcoholic and chronic drug abuser.

Hello dear friends! - . we want to tell you about james hadly chase. significant places. london, a place where chase was

How Chase Ultimate Reward Points will be helpful for Users? - Sell my points is one of the leading credit card mileage

By Chase Buckman - Price matters?. by chase buckman. the

By Tyeshaira Chase - Reynolds vs the united states. by tyeshaira chase. case was on 1 st amendment which practiced:.

Richard III - . by william shakespeare. overview: aspects of the play we will be studying. richard the character the

J.P. Morgan Chase - . silvia moran period: 2. some history…. the bank was known as “chase manhattan bank” until it

You Are What You Drive - Cars and identity. 1. what do cars tell us about american culture?ex. the car chase 2. what does