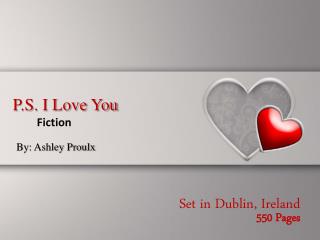 P.S. I Love You. Fiction. By: Ashley Proulx. Set in Dublin, Ireland. 550 Pages. Cecelia Ahern. Cecalia Ahern was born and raised in Dublin, Ireland and is still living there today. She is 32 Years old. Born on September 30 th , 1981. I love you! - . kkk. i love that warm weather makes you happy and that you plan a vacation around it every four months!.

I love you - Because i love you. test

England I love you! - . from:5110. now let’s talk about the british geography and building !. england's

I love you mom - . i don’t know what i would do with out you. zuri davis. mom you are trying so hard to give me a life

Mallika- I Love you - “mallika-i love you” starring ajit, navadeep and nayanatara is a super hit tamil movie directed

I Love You Rituals - . powerpoint created by: kimberley kishpaugh i love you rituals by: dr. becky bailey. table of