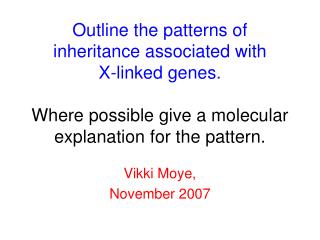 Outline the patterns of inheritance associated with X-linked genes. Where possible give a molecular explanation for the pattern. Vikki Moye, November 2007. X-linked inheritance. When a gene for particular disease/trait lies on the X chromosome it is X-linked November, 2007 - Spreading the love via cgm – nielsen insights on wine and the web. november, 2007. business

november 2007 - . vision. „we are a corporation aiming for success and jointly take on social responsibility for

November 2007 - Expectations of dnos &amp; willingness to pay for improvements in service stage one presentation –