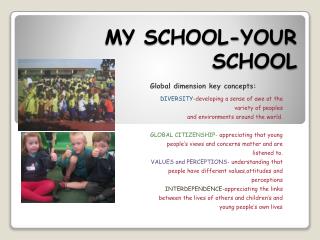 MY SCHOOL-YOUR SCHOOL. Global dimension key concepts: DIVERSITY- developing a sense of awe at the variety of peoples and environments around the world. GLOBAL CITIZENSHIP- appreciating that young people’s views and concerns matter and are listened to. MY SCHOOL-YOUR SCHOOL - . global dimension key concepts: diversity- developing a sense of awe at the variety of

MY SCHOOL - . this is our playground . we have a lot of fun here !. mu. our head-master is excellent. he organizes

MY SCHOOL - . gymnasium nr. 1dichiseni school calarasi county romania. once upon a time…. there was born in 1838 a

MY SCHOOL - . santa joaquina de vedruna (carmelitas). our school is very old. we are going to write about my school. it

My School - . my school is called jean r ous. you might wonder why it is so called. jean rous was a catalan activist who

MY SCHOOL - . nina kristeková 8.a. the school opened its door for students on the 10th of february 1964. after two years

My school - . gymnasium queen’s jadwiga nr 2 in swarzędz. my school look. that’s look my school. classrooms on the

My School - . madam lkl sec sch of mfbm. my school. basic information my class my teachers my timetable public exam

My School - . by:emily. my teachers. at school are miss stamelos is nice. what i learn. at school we learn math. at