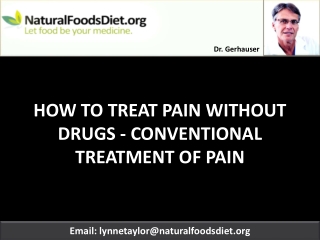 HOW TO TREAT PAIN WITHOUT DRUGS - CONVENTIONAL TREATMENT OF PAIN Pain is usually described as a distressing sensation in a particular part of the body. It is an unpleasant or hurtful sensation resulting from the stimulation of nerve endings. Pain is a complicated process that involves interaction between a number of natural chemicals found in the brain and spinal cord. The reason pain occurs in your body is to protect you. Neurotransmitters, as these chemicals are called handle the task of transmitting nerve impulses from one cell to another. Imagine it this way, that a message of injury is transmitted from the injured area directly to your brain, which registers the sensation known as pain. The brain perceives this pain and sends the pain message back to the injured area. This process happens very quickly within nanoseconds. If your brain registers pain, you typically stop doing what caused it. It goes back to the "fight or flight" instinct. Pain is the body's way of letting you know that what you are doing is harmful, and that you need to stop. Like the best way to keep good health is to follow a healthy natural diet regimen, conventional treatment of pain should be preferred rather than treating it with drugs. Our medical systems have a poor track record for treating pain. A recent report from the CDC’s national Center for health statistics showed in 2008, accidental deaths from prescription pain killers had surpassed deaths from automobile accidents in the United States. This is from a huge river of prescription pain medications being produced and distributed in United States through our broken medical system. In a recent medical conference a Dr. that teaches at Revolutionary technique for treating chronic pain mentioned how he was a fourth generation primary care physician. He looked back to see what his great, great grandfather had used for pain Treatments and basically it came down to preparations from willow bark and the opium poppy. These are the origins o How To Treat Knee Pain? - Suffering from knee pain? looking for a knee surgeon nyc? there are many non-surgical treatment

How to Treat Carpal Tunnel Pain - We know that carpal tunnel is directly related to lifestyle. instead of surgery, rehab

How to Manage Pain Without Medicines? - Apart from considering to buy tramadol overnight, you will definitely feel great

How To Treat Receding Gums Without Surgery? - Do you see a little bit of blood in your sink after brush your teeth today?

How To Treat Arthritis Naturally Without Surgery? - This powerpoint presentation describe about treat arthritis naturally

How to Treat Neck Pain at Home - Fancy spending a whole day with a stiff neck? no right? then why bot look up some home

How Chiropractors Treat Back Pain? - Chiropractic treatmentu00a0is a non-surgical treatment of problems associated with

How to Treat Teething Pain - Teething Remedies - Teething may cause pain and discomfort, which is very stressful for your

How Can You Treat Hazardous Waste Without A Treatment Permit? - Keep in mind that epa views almost every aspect of

How To Quickly Relieve Stress Without Drugs - If you experience drug cravings, you need to take some initial steps to

Treat your instant pain with oxycodone without prescription. - Where to buy oxycodone online |