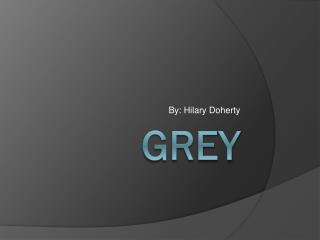 By: Hilary Doherty. Grey. Gray. Grey (also spelled gray in the United States ,) describes the colors ranging from black to white. These , including white and black, are known as neutral colors. Grey Whales - . by: fatimah . gray whales. gray whales migrate during the winter they migrate to mexico it takes a couple

Grey Wolf - Husky. chihuahua. grey wolf. recall from our selective breeding cases that all dogs come from the grey wolf

Grey Wolves - . by annie whane. grey wolves. grey wolves are my favorite kinds of wolves. they live mostly around the n.

Grey and Gay - . a brief discussion of determinants of health and health disparities of lgbt elders. kristin j. anderson,

THE GREY WOLF - . karolína feglová 4.a. existence. the grey wolf is the largest canine in slovakia. they live in the