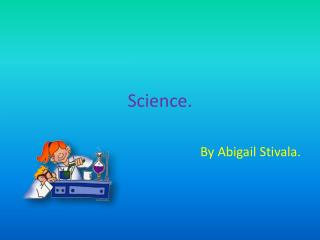 Science. By Abigail Stivala. What is science?. Science is a practical way of understanding the world and everything In it. Make observations and measurements. Try to explain their observations with theories . Test their theories with experiments . What is Science? - . warm-up. what does the word “science” mean to you? answer this question on a sheet of paper. it

Science - . d. crowley, 2007. meissner effect. intended learning outcome (ilo). to know why we study science, and to be

What is Science? - . grade 6s. science is the study of the world around us (living and non-living things). let’s find

Serendipity in Science - . objectives. learn about the role of serendipity in science become familiar with the examples

SCIENCE - . what is it?. science is…. the study of the world around us – in a logical manner something people do – The Wonders Of SCIENCE! - . eli coakley industries. the wonders of

WHAT IS SCIENCE? - . science is the process of gaining knowledge and investigating by making observations , posing

ACT Preparation for Science Reasoning - . andra meredith. why are you here??. have you taken the act at least once? are