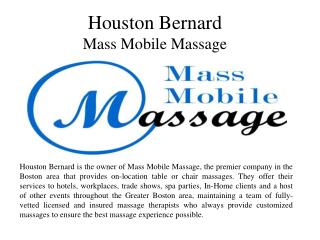 The Houston Bernard Band is one of the top country acts in New England. Houston Bernard draws inspiration from his family’s rockabilly and Country roots, with the aim of creating well-rounded shows that mix heartfelt ballads with party anthems that entice people out onto the dancefloor. The group gained acclaim for their recent single ”Home is in your arms” which was released to country radio in North America, Europe and Australia. Thai Massage in Houston - Thai massage is relatively new to the modern spas, but it is basically an antique method of

Mobile Massage London - Find the highest quality of professional therapeutic mobile massage in london since 2008.our

Massage Therapy Clinic, Mobile Massage Therapist - Massage is a therapeutic way, which is used since the ancient ages for

Mobile Therapist from Cabo Mobile Massage - At cabo mobile massage we bring the whole spa experience to you, our mobile

Plantar Fasciitis Massage in Houston, TX - "i had been having trouble with my feet and had been to a podiatrist,

Get Professional Massage Therapy In Houston, TX - Get professional massage therapy services in houston, tx at an