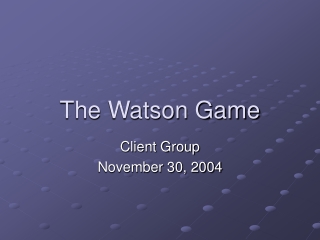 JEAN WATSON’S - . t heory of human caring. jean watson’s motto . “we are light in institutional darkness, and in

Bruce Watson , Instructor - . bruce watson has a master of arts in english literature and has been teaching

An Introduction to Game Engine Design - What's a game engine?. what is a game?game engine definitionthe code or software