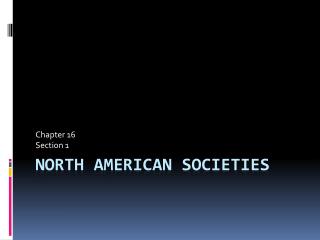 American History Chapter 1 The World Before 1600 - . people arrived on the american continents thousands of years ago and

The First Americans - . people and movements to 1500. introduction. american history began as a multiethnic,

The Earliest Americans - . eq: how did people come to populate all the varied regions of the americas?. key vocabulary.

CHAPTER 17 The Diversity of American Colonial Societies - . 1530–1770. the columbian exchange. demographic changes. the

Ch. 16 People and Empires in the Americas - . 500-1500. section 1 north american societies. complex societies. unlike the

The Earliest Americans - . section 1 chapter 1. focus questions. how did the first people arrive in the americas? why was

Early North American Cultures - . first routes to america. turn to page 5 in your text settlements were believed to have

Chapter 7: The Transformation of the American Society - . october 9, 2013. section i – the new immigrants. the lure of