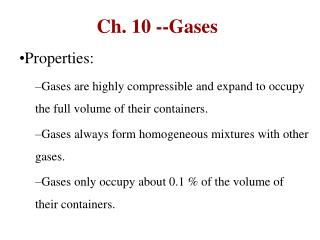 Ch. 10 --Gases - . properties: gases are highly compressible and expand to occupy the full volume of their containers.

Ch. 10 Representative Gases - . oxygen  0 2 2 molecules of oxygen what you breathe ozone is a gas as o 3 3 molecules

Ch 12 Gases - . properties of gases. unique due to distance between particles gases are fluids(can flow) due to