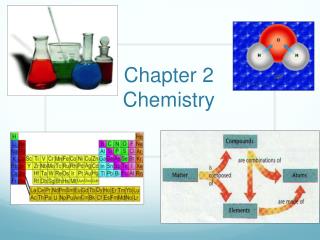 Ch. 2: Chemistry of Life - . the chemical context of life. matter. matter consists of chemical elements in pure form and

Chapter 2 – Chemistry - . why study chemistry in biology?. chemical changes in matter are the foundation for all life

Chapter 2 – Chemical Composition of the Body - . “because living things, including humans, are composed only of

Chapter 2 The Chemical Level of Organization - . matter – anything that has mass and takes up space atom - the smallest

Chapter 2: Chemistry of Life - . given atomic number and mass, calculate the number of each subatomic particle. describe

CHAPTER 2 - MATTER - . 2.1 the particulate nature of matter. chemistry is the study of matter matter has mass &amp;

Chapter 2 Basic Chemistry - . introduction . our bodies are made of different chemicals. to understand the body, you need