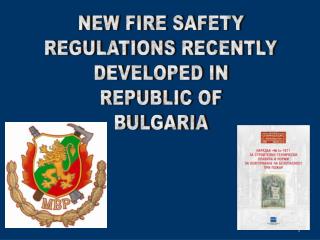 Fire Safety Training - . what if there is a fire?. all study staff who will be working on the floor must know the fire

Fire Safety Management - . pre-assessment. do they have a fire safety program/plan? is it written or not? is it

By Harry - Harry m on term one safety project. by harry. fire safety. don’t play with matches or lighters. change the

REPUBLIC OF BULGARİA - . a brief history of bulgaria. thracians (from about 400 bc): tribal society romans (by 100 ad)

FIRE SAFETY - . keeping your home and family safe. fire safety. in the event of a fire, it is important to remember that

“ Fire Safety Awareness ” and Fire Extinguisher Training by the Enumclaw Fire Department - . this training module was

Patent Office of the Republic of Bulgaria - Annex 8. project proposal establishment of digital libraries for public