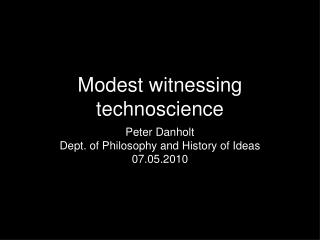 Modest witnessing technoscience. Peter Danholt Dept. of Philosophy and History of Ideas 07.05.2010. Background. Peter Danholt, Assistant prof. Dept. of Information - and Media Studies, AU Not a philosopher! - at least not by education. Member of the STS-centre, IMV, AU Witnessing Series - . washington ubf. how are we doing?. what’s bothering us? fear of rejection not knowing what to say

Modest Appearance - . “never in the history of the world has so much been spent on so little. shorter shirts and

Modest Apparel - Demodest is one of the best brands for online women's modest activewear and sportswear. buy modest

EVANGELISM AND WITNESSING - . defining. lesson 1 for april 7, 2012. evangelism. evangelism can be defined as preaching